TL;DR Today, 9 out of 10 enterprises have recognized the importance of voice for their customers and are investing in development and release of voice apps in the next 12-24 months. But over 40% of skills are used once and abandoned while most of them have a rating below 3.5 stars. Automated testing for voice will guarantee a positive voice user experience that will get you higher ratings. Get started here. 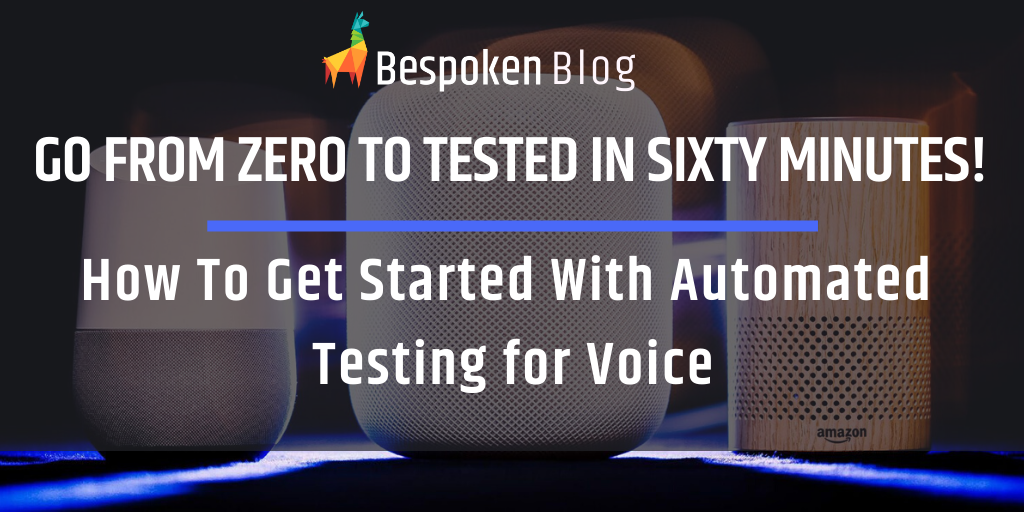 Are you facing any of the challenges below?

Let me show you simple and practical ways to get started with automated testing for voice.

No matter the stage of development you’re in, we have a solution that will meet your needs and ensure the quality of your voice apps.

This article can also help you to create a POC to demonstrate the benefits and cost savings associated with test automation for Alexa Skills and Google Actions.

Best Practices for Getting Started

Here are some tips to help you achieve your goals:

Preparation: Get and Install Bespoken CLI

As a prerequisite to start testing your voice app, you need to have Node.js installed on your computer. If you haven’t already, go here and install the appropriate version for your system. We recommend choosing the LTS version (with the installer).

Now it’s time to get and install the Bespoken CLI. To do that, open your command prompt and type:

Note: If you are on MacOS and the command fails, it’s probably because you need to run it with sudo, like this:

You need to do unit testing to ensure that the individual pieces of your code are working correctly. To that end, you can write unit test scripts to verify each intent and each major piece of functionality. While it’s never too late to start Unit Testing, we recommend implementing it as early in your Voice Development Lifecycle as possible.

Before you start creating unit test scripts, it’s important to know how to organize the files and results. This is our recommendation:

And for the naming conventions we suggest to follow the next structure:

file-namecan equal the main module name (e.g. index) or you can also define it depending on the type of test you are performing (simple, advanced, 1stRelease, etc.)

This test script is composed of two YAML documents, each one starting with three dashes (- – -). The first one represents a configuration section that will apply to the entire test script. In this example, we are only defining the locale for the test.

The second YAML document is a test case, defined by the first line after the three dashes with the reserved word test and a brief description of it. After the test line we have a sequence of interactions, each one starting with a dash and a blank space (in YAML, spaces and tabs are important; learn more about the syntax here).

A typical interaction within a test script file is composed of two parts separated by a colon (:). The first part is an utterance. Since our unit tests are bypassing the voice platforms and just executing locally against your code, you can just use the name of the intent you want to invoke (e.g. LaunchRequest); during End-to-end Testing, which actually uses those voice platforms, you’d use the actual utterance instead (e.g. open my skill).

After the colon, we have the expected result, which is what the voice app should respond with. The expected result can be simple, like just a phrase (Welcome to Pet Match), or it can be more complex like a prompt with multiple valid responses or a card object.

How do the tests work? Easy! We send the utterances to the voice app when we get the actual response we compare it to the expected result, if there is a match, the test will pass, otherwise it will fail.

Notice that it is also possible to invoke an intent providing the slot values it requires, making it a one-shot utterance.

Now, let’s take a look at a more complex example:

In this example, the tags reserved word allows you to define terms that will be evaluated at execution time, including or excluding test cases as defined in the testing.json configuration file (see the next section for more details).

As you can see, it is possible to use regular expressions (i.e. /.you said 149/i) and wildcards (*) in the expected response. Additionally, you can evaluate any element in the response payload, like the outputSpeech or even the sessionAttributes elements.

This file is used to define the configuration options for unit testing your voice apps. It’s typically kept in the test/unit folder of your project. The file looks like this:

Some things to highlight:

Read here to learn all the configuration options for the testing.json file.

To execute a unit test script, just open a terminal and navigate to the folder where you have created it, then use the test command like this:

You will see an output similar to this:

The results in red means that the test case failed. Based on this, we can either fix our test or fix the code.

The summary at the bottom tells us about the success of the tests, as well as basic code coverage info.

To see more detailed code coverage info, we can go to coverage/lcov-report/index.html. The coverage directory will be located in the same directory where your testing.json file is located.

It is important to mention that the environment variable UNIT_TEST is automatically set when running Unit Tests. This can be used to craft unit tests that run more predictably, like this:

You need to do E2E testing because it’s critical to ensure your voice app behaves as expected once deployed on the assistant. Most voice apps work with other services and use different pieces of technology, and so testing only your code (i.e. just doing Unit Testing) is no guarantee you are free from errors. Since users have shown their tolerance for errors in voice apps is far lower than with GUI apps, the best way you can increase retention and engagement is to catch these errors before your users do.

Just like with unit testing, we can create simple End-to-end test scripts to perform this type of functional testing.

First things first. To start testing your voice app you have to create a Bespoken Virtual Device, which works like a real physical device (such as an Amazon Echo) but exists only as software. Follow the instructions described here to get your Virtual Device Token. You will later use this token to execute your test scripts.

Similar to what we did for unit testing, we suggest creating a separate folder to store your End-to-end test scripts. This folder should have a different location than the unit test folder since regularly this type of test is often executed by a different team (QA). See our suggestions here.

The next test script is a complete example that will help us to explain some of the most important features.

The configuration file for End-to-end testing is similar to the one we have seen in the previous section for unit testing. There are many available properties that we can use; let’s look at an example:

I hope this guide has been helpful to you. If you need more help, don’t hesitate to contact us for a demo to show you how easy, quick, and affordable it is to start testing your voice portfolio with our tools.